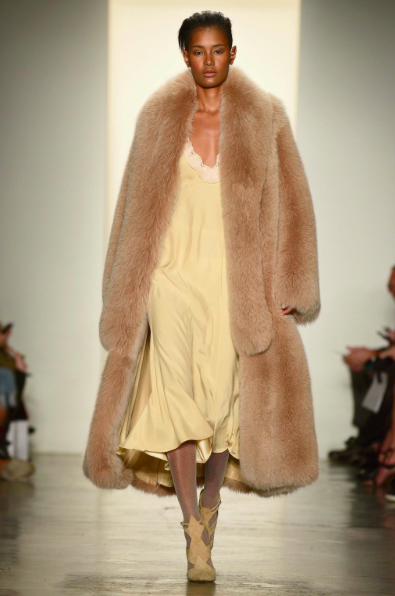 [Jonathan Simkhai for fall 2016; all images via VOGUE.com]

New York Fashion Week is complete, and the key trends for Fall/Winter 2016 have emerged from the runways. Perhaps you blame it on the return of the Star Wars franchise and the beloved companion of Han Solo, Chewbacca, but longer fibered, more natural-hued real and faux fur seem to be taking precedence on the runway for fall/winter 2016.  Fur is, of course, not a surprising staple for winter collections, but this season’s lineup has rehashed it in order to make it feel fresh and edgy.

Sally Lapointe embellished her over sized knits with luxurious fur sleeves, while Zang Toi opted for more traditional vests and collar accents. Jonathan Simkhai showed ultra plush fur coats, and further proved this is a piece that is not going away any time soon. Moncler Grenoble perhaps took the most unique approach, even going as far to show the collection outside at Lincoln Center to truly expose its new garments to the elements Among the many ski-oriented clothing options from the brand were fur cuffs and lined boots, perfect for the sub-zero temperatures they were presented in. Click through the slide show above to see how these, and other brands and designers interpreted the fur trend this season. The Theme: Inspired by romance in the French Riviera, the Zang Toi show felt like a haute couture daydream complete with a dew-like misty air and whimsical French music.

Best/Collection’s Signature Standout Look: The standouts in the collection included evocative menswear inspired looks and fanciful fairy princess gowns. The looks epitomized a strong, sexy female who nurtures her soft and demure side. Romanticism was at the crux of the assemblage. Expertly tailored blazers and trousers, pleats, ruffles, oversized sleeves and jewel-encrusted accents were abound in the French fantasy.

A black floor-length tailcoat with intricate hand beaded wildflower lining was paired with a silk tuxedo shirt, white bowtie, exposed garters and black silk high-waisted shorts. An ice lilac hand loomed rayon gown was both adorned with a “French Riviera” crystal necklace and unadorned with a sexy back. Zang Toi’s Spring/Summer 2012 collection opened with a big bang; beautiful taupe, black, and white silk garments kept the audience’s eyes locked on the runway as the glamorous looks brushed by.  The flowing length of the pieces swayed behind the models in flawless ruffles, uttering a toned down simple and chic aesthetic.  Just when you thought you had a decent understanding of the collection, Toi incorporated that striking royal blue (the one you see all over the streets these days) into many of his dresses, in particular the one seen on Kirstie Alley, who made a rare, runway appearance.  Brighter colors, shorter lengths, and bedazzling jewel décor all built up to the elegance of the finale, which gave off a sense of royalty that one never would have anticipated from the more casual start of the show.