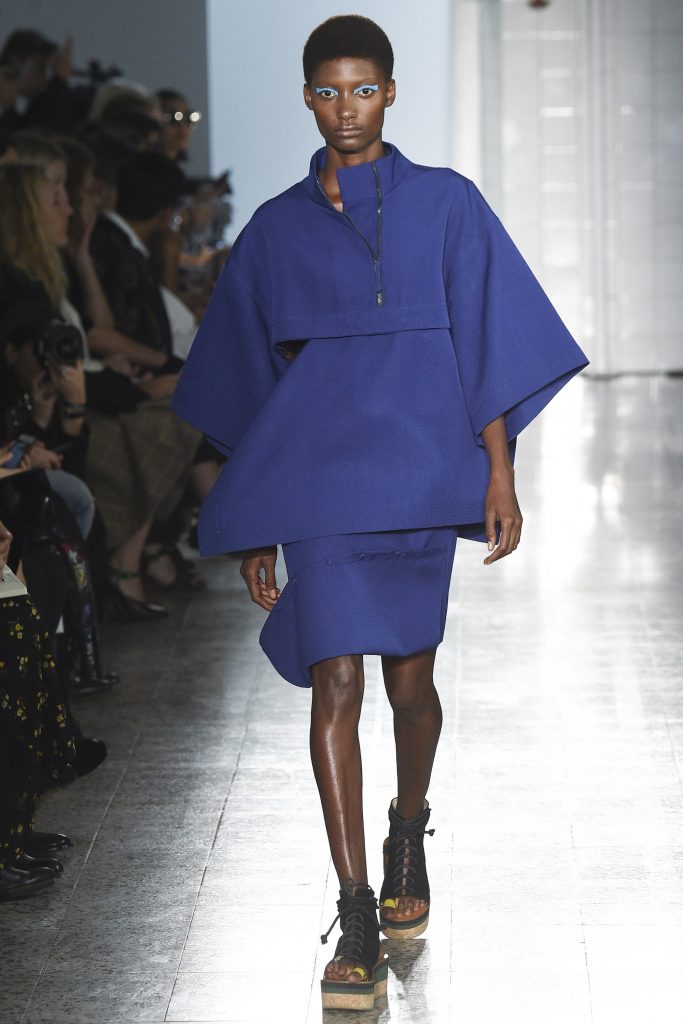 Here’s some of Fashion Pulse Daily’s favorite Ports 1961 pre-fall 2011 looks – we love the interesting hues and color combinations that are the perfect transitional items from season to season! Plus. there’s no denying the inevitable return of rich blues and browns. Inspired by the arid desert landscape, the Ports 1961 show on Friday took the audience by storm. The palette was a muted mix of sandy hues with pops of emerald green and magenta. I loved the bright white peaking out from the warm khaki tones of a swingy cropped trench in the first look of the show. So wearable! So chic!

The models gave off a cool-as-can-be Farrah Fawcett vibe with their voluminous curly hair and shimmering bronze skin. Beyond the desert theme, what unified the show was the beautiful draping. Each look seemed to float effortlessly on the model as she graced the runway with long, sweeping strides.

The show progressed into evening wear with feathery dresses, rose-gold metallic, and some serious Swarovski crystal accents. For those willing to splurge, Fiona Cibani delivers the shimmering sand and sun of the Sahara directly into your wardrobe. This season Maticevski took more of a slapstick glamour approach to the collection, with sparkles, satin, and mainly filmy, floaty gowns taken precedence. Most edges were left unfinished, giving a very ‘the clock has struck 12 for Cinderella’ type of aesthetic. The footwear collection was both edgy and sweet, complimenting the forlorn, tattered princess look. Most certainly, Maticevski’s gowns could appear on the Red Carpet; we’re thinking Drew Barrymore or Rachel McAdams.

Inspired by both the past and future, Tia Cibani used shades of tobacco, mulberry, iris and rosemary to juxtapose the superflous with the fitted in her silhouettes. The nod to Pierre Cardin space-age chic was updated with exposed zippers, watercolor prints, and amazing, oversized necklaces. Attention to shoulder detailing was a standout, and the sweaters will certainly make the must-have list for fall 2010.