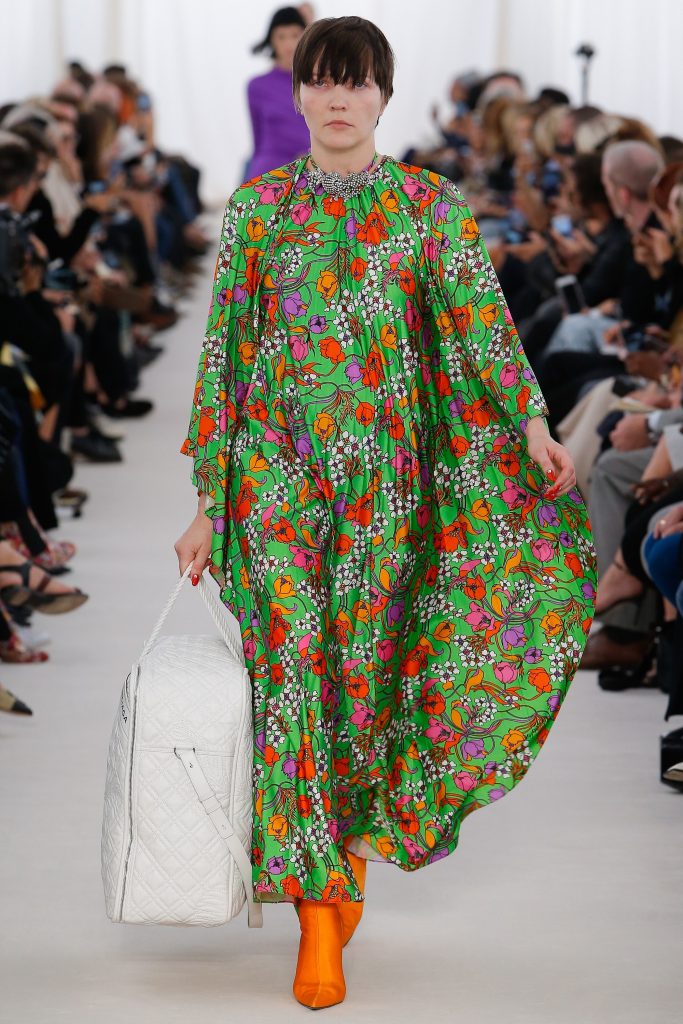 This past December, Pantone, the global authority of color trend information, debuted its newest color of the year: Greenery. Each color of the year choice is a symbolic representation of what is predicted to occur in global culture that year, and usually influences fashion, beauty, architecture, technology, food, and travel. Last year came with the release of not one, but two colors of the year, Rose Quartz and Serenity, a pale pink and pastel blue respectively. The pairing was meant to represent the recent blur of of gender norms in terms of fashion and everyday life, coinciding with gender equality movements around the world. The last time we saw a shade similar to this year was 2013’s color choice of Emerald, which was chosen to symbolize elegance and luxury.

Referred to as “nature’s neutral,” this years yellow-green tone carries the lightheartedness of the first days of spring, representing new beginnings, and a refreshing, revitalizing mood. Arriving in the midst of major changes to the social and political landscapes, Pantone wanted to evoke hopefulness, rebirth, and rejuvenation. Although the idea of “going green” is not a revolutionary one for 2017, the color also symbolizes a growing movement to protect nature amidst the ongoing fight against climate change.

Greenery has already made an appearance on several Spring 2017 Ready to Wear runways, like Gucci, Balenciaga, and Valentino. Although this shade may seem hard to wear, new arrivals in the beauty, accessories, and fashion industries are proving the tone to be easily wearable for anyone. Butter London released a nail polish to commemorate the newest color of the year, and cosmetics brands like NYX, MakeUpForEver, and Sephora all carry easy-to-use products in the green hue. In the accessories department, check out Ray-Ban’s Wayfarer Lightforce sunglasses in green and Burberry’s Small Banner Leather Tote in pale pistachio green. Surprisingly, Greenery can be easily paired with a wide variety of color combinations; try pairing the green tone with last year’s colors of pale pink and blue for a more bold look, or with neutral tones of beige, gold-browns, and cream for a more subtle pop.

Click through the slideshow above to see our other top picks for beauty and accessories in Pantone’s newest color of the year choice. 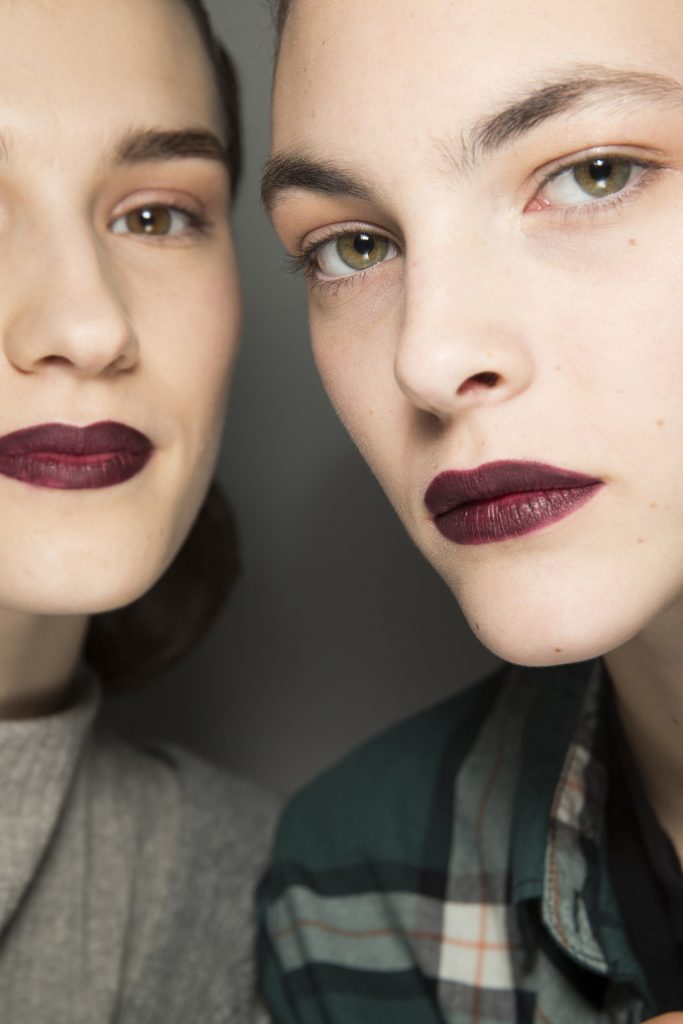 [Dark Lip at Marni Fall 2016 Ready-to-Wear; all images via Vogue.com]

This fall season’s beauty trends range from traditional staples to eye-catching statement looks. Looking back on the Fall 2016 Ready-to-Wear runway looks, we can easily see that the makeup used within various shows was an accurate prediction of what will be trending in the cosmetic world this fall. On the more unsurprising side of things, the dark lip has returned to its usual spot as a true go-to for the colder months of the year. Seen on runways like Rodarte, Louis Vuitton, and Marni, the dark lip trend in deep plum and red tones was made a focal point. To get the look yourself, try NYX Cosmetics Simply Vamp Lip Cream in shades She Devil and Covet, which are both available online for $6.50. Or, try Urban Decay’s Vice Lipstick in Blackmail or Disturbed, also available online and priced at $17.

More on the side of dramatic statement looks is the smoky, smudged eyeliner, which was also a popular choice on the Fall 2016 runways. This goth-inspired look complemented the collections shown by designers and brands like Adam Selman, Elie Saab, and Givenchy. Going the daring eye makeup route can be intimidating for many, so at first, you may want to opt for a more wearable, subtle version. Try the Marc Jacob’s Highliner Gel Eye Crayon in Blacquer, available online for $25, or NYX Cosmetics Tres Jolie Gel Pencil Liner in Pitch Black, also available online for $12.

Another core trend in beauty that has seemingly been in the spotlight for multiple consecutive seasons now is the natural, bold eyebrow look. Being that it is much easier to get away with darker, bolder brows come fall and winter, it is no surprise that this look also made several appearances on the fall 2016 runways. Valentino, Balmain, and Nina Ricci all opted for easy-going natural brows, rather than heavy filled-in versions. To recreate this low-maintenance look, try Soap & Glory’s Arch Brow Gel, available here for $12, or Anastasia Beverly Hills Tinted Brow Gel, available online for $22.

Click through the slideshow above to see more of the best fall 2016 beauty looks, straight off of the runway.

NYX Cosmetics Opens its First of Many East Coast Locations NYX Cosmetics (pronounced “nicks”) recently held the grand opening for its first ever East Coast location in Willowbrook, New Jersey, part of the brand’s expansion plans with 20 more openings planned in 2016. NYX hopes to become a staple in every woman’s makeup collection, which no becomes a breeze thanks to products that are both affordable and versatile, covering all the bases from face, eye, and lip products to nail and body additions to round out your beauty look.

Be sure to check out the brand’s signature Butter Lipstick, ($6) which comes in over 30 colors, and feels exactly as it sounds; like a satin texture that glides on like butter. It’s a nice change from a wide swath lipsticks some even quadruple that price, that only seem to cause dryness and lack proper hydration. Another NYX star product is the Wonder Stick, ($12) which allows any level of makeup application expertise to achieve the perfect conceal/contour/highlight combo with ease (much easier to use than powder!). Other favorites include the Makeup Setting Spray in Matte or Dewy ($8), and the Eyebrow Gel ($7).

NYX Cosmetics products can always be purchased online, and stay on the look out for a location opening up by you!

This week, I’ve got so many fashion and beauty gems to share with you, that it goes above and beyond the normal count for a “Fashion Pulse Flash” segment! I hope you enjoy what I have to share, and have a wonderful weekend and happy summer solstice; it’s FINALLY GORGEOUS OUTSIDE!!

Kmart Fashion has been hosting a Remix Series challenge, in which you can show the world how you styled an item from one of the store’s brands, while getting a chance to win a $500 Kmart gift card AND a trip to New York City in order to gain an exclusive look at the next photo shoot and Kmart’s Design Studio. For the third installment of this look, featuring a pencil skirt, Kmart fashion had one of my favorite designers, Rachel Antonoff,show how she would style it on four very different, but stylish women: her mom, grandma, work colleague, and herself. See the adorable video above, and enter via the Kmart Fashion Facebook page or by uploading their photos to either Twitter or Instagram with hashtag #MoneyCantBuyStyle and @KmartFashion. Hurry though — you’ve only got until June 24th to enter!! 🙂 Let’s talk Skyn Iceland! I recently attended the Slow Down & Cool Down event, a chance to relax and take in the skin care brand’s latest offerings hosted by my friend Lara of Pretty Connected at one of my absolute favorite stores in the city, Henri Bendel. If you’re unfamiliar with the brand, in a nutshell, skyn Iceleand Solutions for Stressed Skin (full tittle) does just that, as the first skincare line to identify and efficiently combat signs of stress on the skin, which deal with issues such as irritation, breakouts, redness, sensitivity, and premature aging.

In fact, at the event, there was a test given, similar to a thermometer, to give a number to your level of stress (I actually didn’t do that poorly, which SHOCKED me!).  Use the brand’s products daily or as an add-in t your regular routine during times of intense stress. Some of my favorite products that I sampled from the event include the Arctic Face Mist ($29), which feels as good as it sounds as it restores, hydrates, and balances skin, and can be used in place of toner or as a makeup set mist, and the Hydro Cool Firming Eye Gels, which cool, soothe, and depuff the eye area in 10 minutes.

AND, as an extra bonus, mention this blogger offer to Slow Down & Cool Down this summer at Henri Bendel, and receive an exclusive gift with any skyn ICELAND purchase at Henri Bendel (a $17 value; expires 7/31). NYX Cosmetics‘ Parallel World’s Box , inspired by the sci-fi/teen film coming out this summer, The Mortal Instruments; City of Bones includes six full-sized products that devise two looks from the film. One, an “innocent day look” for the character Clary (Lily Collins), while the other, a dark and mysterious night look like Isabelle (Jemima West), will have you prepared for a much easier day to night transition, which won’t necessarily include hunting demons like the film’s protagonists. The NYX Cosmetics kit (pronounced “nicks” btw) which has a mascara, eye shadow palette, lip cream (my favorite), blush, eyeliner and eye pencil is stored in a cute jewel knob box, retails for $24.99 for a limited time at ulta.com and ULTA stores.

Aren’t these the most beautiful and complex iPhone cases you’ve ever laid your eyes on? It appears as if fashion designer Mara Hoffman‘s intricate and carefully engineered prints were always meant to make their way onto a phone, and thanks to the collab with Incase, six cases are available for iPhone 5 at goincase.com and select retailers for $39.95. I never thought I would upgrade to the iPhone 5 as I’m pretty content with the 4S, but dangit Mara Hoffman and Incase, now I will have to change my mind just so that I can have one of these beauties! Nordstrom’s Anniversary Sale is less than a month away (starts July 19th!!), so it’s high time you start compiling your beauty bucket list and items that are running low and you need to replenish. I was super duper lucky to attend the Nordstrom Beauty event at Treasure & Bond, owned by Nordstrom which donates 100% of profits to charities benefiting children in NYC– how cool is that? END_OF_DOCUMENT_TOKEN_TO_BE_REPLACED