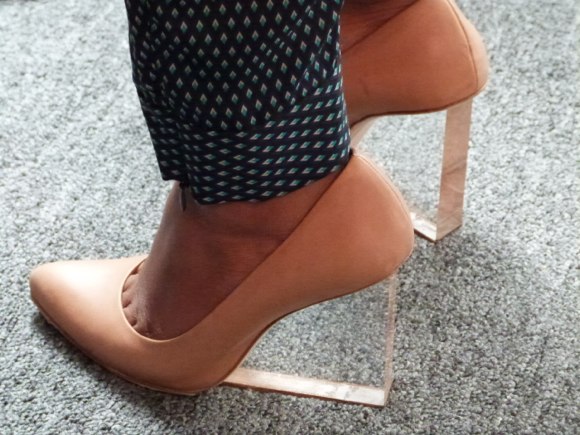 Footwear is one of my absolute favorite fashion-related objects, and I certainly possess more than I can handle! I couldn’t help but be drawn to the footwear choices worn during NYFW by show goers, makeup, hair, and nail artists as well as the publicists and press backstage, and last, but not least, the models themselves, both their own shoes that they wore into the venue, and had to don for the fashion shows or presentations. See the slideshow above for some of my most favorite footwear finds, and they are in order by:

1) show goers; feet are mainly on a grey carpet

2) footwear found backstage is on a darker, almost black carpet

Which pair is your favorite? The Collection’s Best Look: The Katya Leonovich collection featured several high end fabrication elements including taffeta, chiffon, crinkled linen, silk, patchwork and leather. Each piece offered unique ruffles and draping that gave the pieces a deconstructed, yet elegant feel. The standout was a hand-printed chiffon tunic with crinkled linen pants, while the show closed with an olive green leather patchwork dress that had the movement of lightness while feeling ethereal.