After working with industry heavyweights like Madonna and Rihanna as well as styling countless magazine covers and ads, stylist Lori Goldstein now has her own collection for QVC, called LOGO by Lori Goldstein. The launch will take place at the QVC pop-up shop in Rockefeller Center on September 15th during Fashion Week, and feature key wardrobe staples like chiffon tees, skinny ankle pants, and jersey cardigans.

The pieces will all retail for under $200 and will be available on QVC and QVC.com. 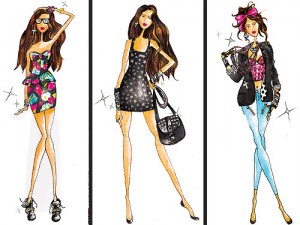 Madonna and her 13 year-old daughter Lourdes Leon will be launching their junior clothing and accessories collection, Material Girl, exclusively at Macy’s on August 3rd. The line is greatly influenced by how Madge used to dress but as she said to Us Magazine, “The actual design is all Lola.” Having recently debuted sketches for the affordable Fall 2010 collection, retailing from $12-$40, Material Girl is offering a great mix of fun mini-dresses, skinny jeans, flirty blazers and cute accessories.

Taylor Momsen has also been chosen to be the face of the pop icon’s fashion line. Featuring edgy, rocker-inspired back-to-school items, the 17-year-old singer and actress should be a perfect fit for the teen line. ♥ Halston creates a duo of fragrances, for men and women, in cool Terminator-like liquid bottles.

♥ Nicole Ritchie designs maternity wear for A Pea in the Pod.

♥ CLEAR Magazine saves some trees and goes digital for its latest issue.

After seeing Madonna in concert for the first time this October, my twenty-some year obessession with the pop legend blazed anew. My boyfriend is getting a little fed-up of the Hardy Candy album rotation in our itunes playlist, and while driving home to Pittsburgh for Thanksgiving, I made sure that we had no less than three Madonna cds in the car ready to slide in and keep me bopping to the beat all the way down the PA turnpike. Back to the point — several photos just surfaced from the advertising campaign for Louis Vuitton, starring none other than Madge! Due to appear in fashion magazines this February, the ads, shot by Steven Meisel, has a definite French-bistro theme (although shot in L.A., of course). All I have to say is — love it!