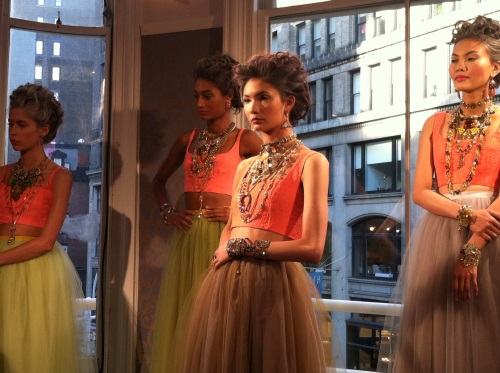 [Click on the slideshow above to view the collection]

Drawing on Sofia Coppola’s film Marie Antoinette, Lulu Frost designer Lisa Salzer has created a line of richly decorative jewels that would make any woman surely feel like a queen. Surrounded by peacocks, macaroons and models in pastel tutus, one felt as if she had stepped back in time to a party at the palace of Versailles, if Versailles had a DJ in gladiator heels, that is.

“Neon Baroque” blended classic baroque elements of elaborate ornamentation with more modern neon and geometric shapes presenting a certifiable mix of old and new. Each piece was so expressive and finely detailed that a singular piece is enough to turn up the volume on any outfit. When asked what kind of woman she could see wearing her pieces Salzer described one who has a sense of her own independent style, a woman who knows who she is and is not afraid to express it. If creating a collection of fearless jewels for fearless women was Salzer’s mission, then it was a success. So go forth and conquer with any one of these bold pieces, but instead of using a crown and scepter to show your power, opt for a Lulu Frost statement necklace instead.

Let’s Bring Back by Lulu Frost: A Celebration of Three Icons The Show: Let’s Bring Back by Lulu Frost: Celebrating fashion icons from a storied past

The Collaborations: Lulu Frost reinterprets Belle epoque heiress The Marchesa Casati, jazz age activist Nancy Cunard and Surrealist designer Elsa Schiaparelli. With each piece, she introduces a new generation to the icons –and her reinterpretation with the jewels. Best Standout Look/the Signature of the Collection: Each of the three collections evoked its very own mood. The Marchesa Casati collection spoke volumes about the Belle Epoque (“beautiful era”), in French history, in which the arts flourished. Lavish emerald necklaces were a visual art in themselves, but layered with chunky gold and crystals, they became a masterpiece. The Nancy Cunard pieces danced to life with bold bangles making a cultural statement. Finally, philosophy may have played a role in the reinterpretations of Elsa Schiaparelli’s designs. Evil eye jewelry upheld the secrets of a past movement known for its surprising juxtapositions.

Given the surplus of ridiculously cheap jewelry I’ve collected from Forever 21 and Old Navy (hey, it doesn’t look as cheap as it is – at least not until the 10th wear, and by then it’s practically bought itself!), I have a hard time justifying splurging on bangles and baubles. I mean, why spend so much money on a single piece of fine jewelry for myself when I can get a whole handful of faux trinkets for a fraction of the price? Of course, there are always exceptions… namely when a genius collaboration of designers births an accessories line so chic, I can’t bear to pass it up, even if it goes against all my more practical budgeting plans. And the long-anticipated Lulu Frost for J. Crew collection is definitely one of those lines that’s worth pushing frugality to the wayside. Incorporating all sorts of on-trend styles like chunky bangles, multi-colored enamel jazzed up with sparkling crystal accents, and bold geometric shapes, these updated Art Deco inspired pieces are the perfect contrast to the upcoming season’s oversized sweaters, muted hues, and chunky knits! Plus, ranging in price from around $45 to $135, you can still indulge without feeling too impractical… plus, these pieces won’t fall apart by the 12th time you wear them!