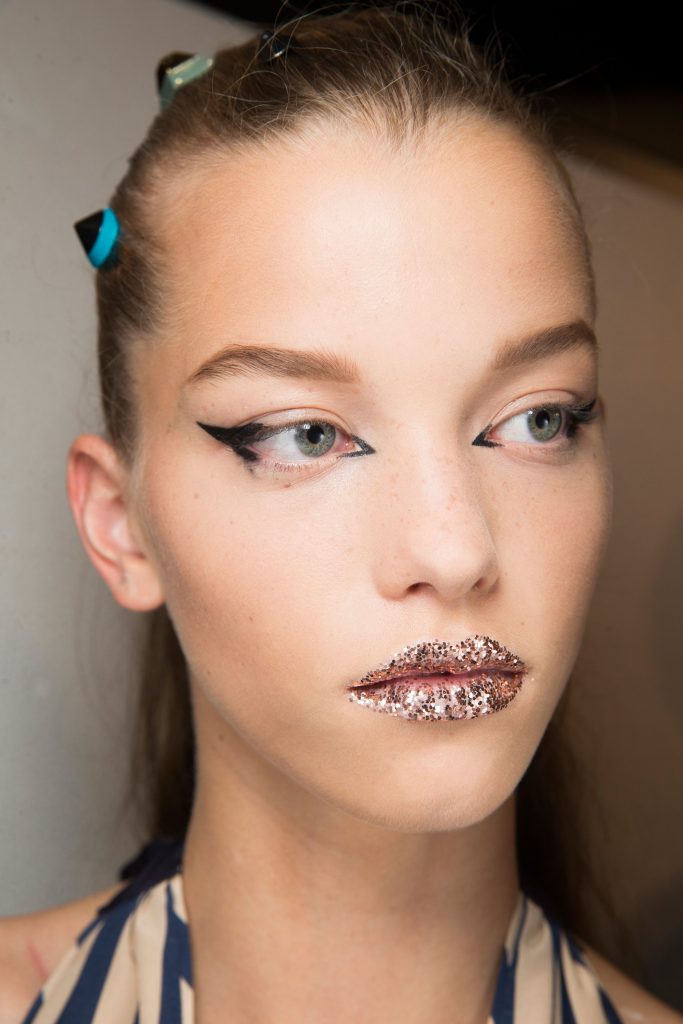 [Glitter lip at DKNY SS17; all images via Vogue.com unless otherwise noted]

[Red lip at Creatures of the Wind SS17; image via Fashionista.com]

Judging from the recent runway shows for the upcoming spring/summer 2017 season, next spring will definitely be the perfect time to try out that bold lip color or vibrant eyeshadow that you’ve been hesitant to use in the past. The beauty trends from this most recent fashion week season are anything but subtle, with looks ranging from solid glitter lips to bright and bold eyeshadow that stretches way beyond the eyelids.

Classic looks like the timeless red lip also made a major statement on many prominent runways. One of the most notable trends that has taken off in runway shows all over the globe is the use of glitter. Bold looks even took over at New York Fashion Week, which is more known for showcasing extremely minimal, no-makeup beauty looks on its runways. Despite this however, DKNY’s show a few weeks ago had one of the most talked-about beauty looks overall. The makeup for the show was done by reknowned makeup artist Pat McGrath, who used the DKNY runway to showcase her most recent release, the currently sold out Lust 004 Lipstick Kit. The look is made up of a red lipstick base with pressed glitter on top, making for a truly show-stopping look. The glitter did not only show up on lips, but also in eyeliner, as seen at Versace, and in painted-on embellishments in various geometric shapes, as seen at Giamba.

Following along with the boldness of heavy glitter is the use of bold, colorful eyeshadow, which at many shows was applied also along the cheekbones as highlighter, as well as extending across the eyelids. At Victoria Beckham, emerald green and cobalt blue shadow made a huge statement, and was fresh and unusual compared to what the designer would normally choose for makeup looks. At Louis Vuitton and Max Mara, similar eye definition was used, but even more dramatic. Vibrant hues of green and orange were glided along both the cheekbones and eyelids at Max Mara, which was a perfect fit within its tropical-inspired collection. At Louis Vuitton, a sleek cat-eye in black liner was complimented by deep navy shadow, which extended far over the brows. Finally, among the abundance of bold glitter and vibrant eyeshadow, the classic red lip proved that it’s here to stay, making appearances on runways like Jason Wu, Cushnie et Ochs, and Creatures of the Wind. At Cushnie et Ochs, the look was slightly updated, and was actually two-toned. The top lip was done in a timeless red shade, and the bottom in a more vibrant pink-red.

Click through the slideshow above to see how these prominent beauty trends were used at other shows throughout fashion month. The Collection’s Signature, Standout Look: We are living in an age where technology is involved in absolutely everything, so it was only a matter of time until its influences started showing up in our clothes as well. Using laser cut technology, many of the sheer pieces featured a motif of falling flowers as well as geometric patterns cut into sharp corners on jackets, dresses, and skirts. These precisely cut pieces recalled grid patterns found in the digital world reinforcing the stated technological theme. Fendi’s signature fur showed up in the accessories adorning silver purses with bundles of multi-colored fuzzy options, showing that amidst all this change and technological innovation, there are some things, like a well-crafted fur, that can never be digitally replaced. The Theme: Ice for Spring