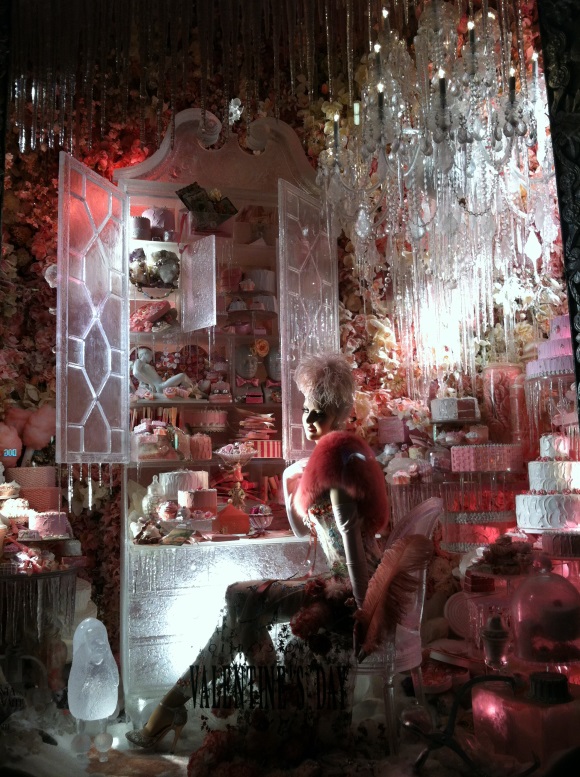 Bergdorf Goodman continues to take window dressing to another stratosphere, that you certainly won’t find anywhere else. Its latest holiday installments were revealed in the store’s first-ever public sidewalk event last night,  November 19th. The unveiling of this year’s holiday windows was turned into a spectacle for the crowd, complete with acrobats descending the walls with spotlights shining lights into the sky, and a giant, twinkling snowflake, suspended from up above. The evening was hosted by Bravo’s Andy Cohen and Bergdorf’s fashion director Linda Fargo.

The inspiration for this year’s windows was “Holidays on Ice,” in which the creative team took traditional holidays and gave them a twist by covering them in ice and snow.  The Valentine’s Day window was a pink confectionery wonderland, filled with sweets and a mannequin in a Oscar de la Renta pink fur stole sitting at a desk carved out of ice.  April Fool’s Day was presented topsy turvy style with the entire Art Deco ice scene installed upside down. The Arbor Day window centered on a giant porcelain tree adorned with crystal leaves and flowers, while a mannequin in a floral Alexander McQueen  gown sits surrounded by ice animals and butterflies.

Click on the slide show for a view of several of the windows or if you’re in New York for the holidays, head to 5th Ave between 58th and 57th Streets between now and January 6th.