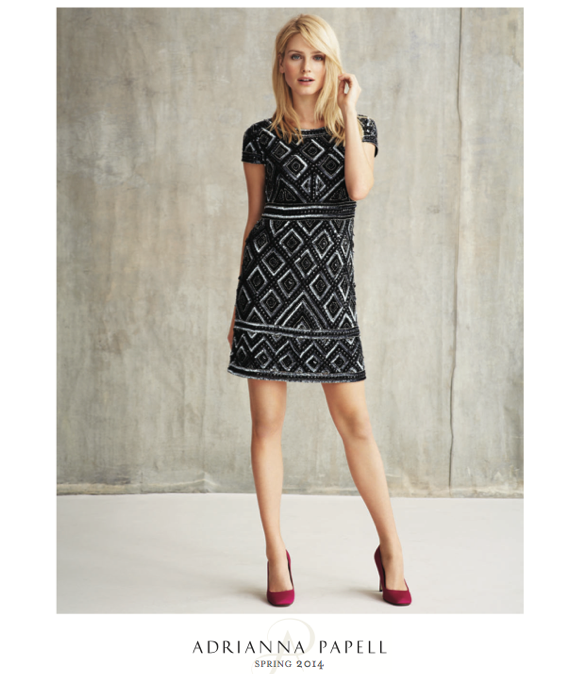 It’s not every day that one experiences a collection that is adored in its entirety, therefore, I’d love for you to take a look at the Adrianna Papell spring 2014 collection, because I KNOW there are a lot of pieces in there that you’re going to swoon over! I’ve cut it down to a handful of looks, so that it will still be a surprise for you to see some of the great sportswear pieces once they hit the racks, come spring.

What you can expect are all of the modern classics, from slouchy pajama-inspired pants coupled with micro prints to softly structured mixed media boyfriend jackets and thoughtful, sophisticated complimentary pieces placed stylishly in between.

Dresses that were conceived in order to be worn from day into night are an integral part of the collection, and overall the attention to detail embedded into spring 2014 elevates it from every day sportswear to steadfast, stand out pieces. Elements such as pocket flap adornment, zig zag embroidery placed upon the seaming, artful all-over beading, and carefully engineered prints found in the latest silhouettes fully capture the sublime and the beautiful of the season’s best trends.

And don’t forget about the footwear! From oversized polka dot patent flats to color blocked stacked heels, there’s whimsy, flare, and a polished edge to every pair that can certainly rest on their fabulous laurels, or make the perfect accompaniment to your spring 2014 wardrobe.

Which piece are you most looking forward to owning?

Adrianna Papell is available at fine retailers nationwide, such as Bloomingdale’s, Nordstrom and Von Maur.